Why are we researching the Petermann Glacier system?

Ice is generally thought of as a solid, and one might imagine that an ice sheet is much like icing on a slab of yellow cake – a static layer, softening and melting away at its edges as the surrounding temperatures increase, losing vertical integrity over time. An ice sheet, however, is anything but static – ice slowly flows across a mass of bedrock, melting and refreezing throughout the year. Ice is also lost to the sea as icebergs by way of “marine-terminating” outlet glaciers. These “rivers of ice” drain ice from the center of Greenland down towards the surrounding oceans. Petermann is one such glacier; it is also one of the largest remaining floating ice shelves in the northern hemisphere and has been changing drastically in the last 5 years:

One-quarter of the floating ice shelf, about 97 square miles, broke off in August, 2010: 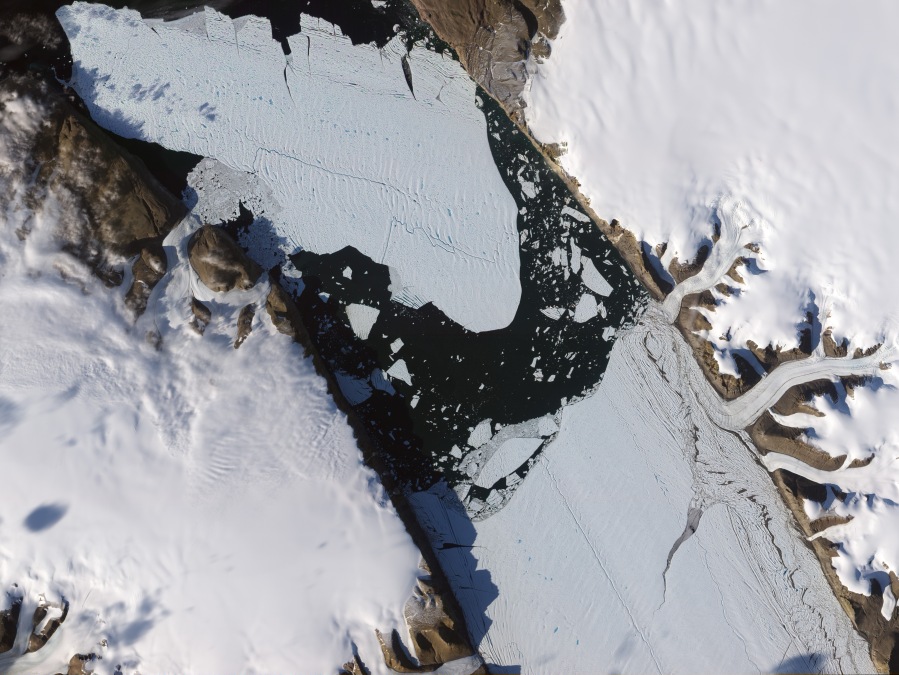 Petermann Glacier is a scientist’s treasure trove. It is a system of ice and sea that is responding radically to yet unidentified changes. It is measurable from top to bottom, from the ice to the seafloor via coring. And surrounding influences compel scientists to approach this system more holistically, producing an understanding that will allow them to make more accurate predictions about responses to changes in the ocean and atmosphere.

For many of us, however, large glacier systems draining water from the ice sheet’s interior could turn into a big problem, especially when drainage rates increase. The Greenland ice sheet contains enough water to raise global sea level by 7 meters, and though this would occur over 100s to 1,000s of years, even small increases in freshwater input to the ocean can have surprising impacts, potentially triggering changes in global ocean circulation that transports heat and maintains familiar climate patterns.  And we know that sea level is rising; island nations in the south Pacific are losing land, and storm surges are exacerbated  by higher levels, as we saw during hurricane’s Katrina in New Orleans and Sandy in New York and New Jersey.

A recently review shows that the Antarctic and Greenlandic ice sheets melted and raised sea level by 6 meters on multiple occasions over the past 3 million years, during periods of warming of 1-2 degrees (Celsius) [1]. Though past sea level rise was probably slow on human scales, we can expect future long-term rise of similar magnitude, since projected future warming is as large or larger than the the natural warming that occurred in the past.

This is precisely why we need more information, why we need to resolve past climate in order to better predict and model the future, and why expansive efforts are focused on understanding the exact mechanisms that drive melting and overall ice-loss.

Paleo – referring to the geological past – researchers specializing in ice, climate, and ocean, are coming together this summer to study the Petermann Glacier system. Current measurements span only a decade or so but future changes will play out over centuries or millennia, that’s why scientists need to have longer records from the past. Having this paleo perspective allows us to better understand how such large changes will play out over time.

The glacier is connected to an ancient channel system, thought to be a mega-canyon that predates the glaciation of Greenland. Researchers will reconstruct glacier and ocean history from sediment cores; this will allow them to resolve ice extent and retreat within the Holocene (11,700 years ago – present). These researchers seek to tackle the following questions:

We’ll launch from Thule, Greenland on July 29th aboard the Swedish icebreaker Oden (pictured below). Research groups from institutions across the globe will be focusing on different aspects of the research (details can be found on the Who page). This expedition has taken nearly a decade of planning, and to see it come to fruition this summer is a treat for everyone involved – we have the opportunity to work both on the ship and on the ice – drilling for sediment and ice cores, taking samples from rocks for cosmogenic isotope dating, and capturing water-property data along the fjord and Nares Strait (the channel separating northeast Canada from Greenland) to better understand the thermal conditions and circulation patterns of the ocean.

We hope you will join us on this journey by following us on Instagram and Twitter, and by checking out the videos we’ll be posting as we go along.

Petermann Glacier is one of the largest glaciers of the Greenland ice sheet, and yet, relatively little is known about it or the surrounding area. Petermann Fjord lies in an ice-choked and remote corner of northern Greenland, it is difficult to access by ship, even in the relatively benign summer months.

Petermann Glacier drains ice from the centre of the vast Greenland Ice Sheet to the ocean in the 90 km long Petermann Fjord (Figure 1). Sparse depth measurements show that the fjord bed lies up to 1100 m below sea level – it is one of the deepest fjords in Greenland, testament to many millenia of intense glacial erosion. However, much of the inner-fjord remains unexplored; knowing the shape of the fjord is really important for understanding how the glacier will behave in the future. Shallow fjords allow glaciers to rest on the bed, which has a stabilising effect. In contrast, deep fjords permit ice to float in seawater, making the ice prone to breaking away in the form of icebergs or large ice islands. One of the many goals of the Petermann 2015 expedition is to survey the inner-fjord and produce high-resolution bathymetric maps of this area. This will greatly improve predictions of the future behaviour of the glacier system. Petermann Glacier is vast, it drains more than 4% of the total ice sheet – an area larger than the state of West Virginia (see drainage basin in Figure 1). The glacier flows like a river of ice towards the sea at a speed of approximately 1 km per year and delivers 12 billion tonnes of ice to the ocean annually; enough freshwater to supply London for nearly 25 years* (Figure 3 – [5, 6, 7]). Once the glacier hits Petermann Fjord, the ice begins to float, forming an ice tongue which currently covers an area of 900 km2. The ice tongue thins, from nearly 600 m thickness where it enters the fjord, to around 100 m at the glacier front [8]. The ice thinning is primarily (~85%) caused by melting from the underside of the ice by relatively warm ocean waters [5, 3]. Consequently, it is crucial to know what is happening in the ocean in order to predict how the glacier might behave in the future. Current oceanographic data are sparse, providing only a “snapshot” of conditions, [5, 3, 8] and almost nothing is known about how the oceanography of the fjord varies over time – does warm water permanently circulate beneath the floating tongue? Does turbulence in the fjord help melt the ice? We hope to address these unknowns by collecting a wide range of ocean measurements, including drilling through the floating ice tongue to measure water properties beneath the ice. 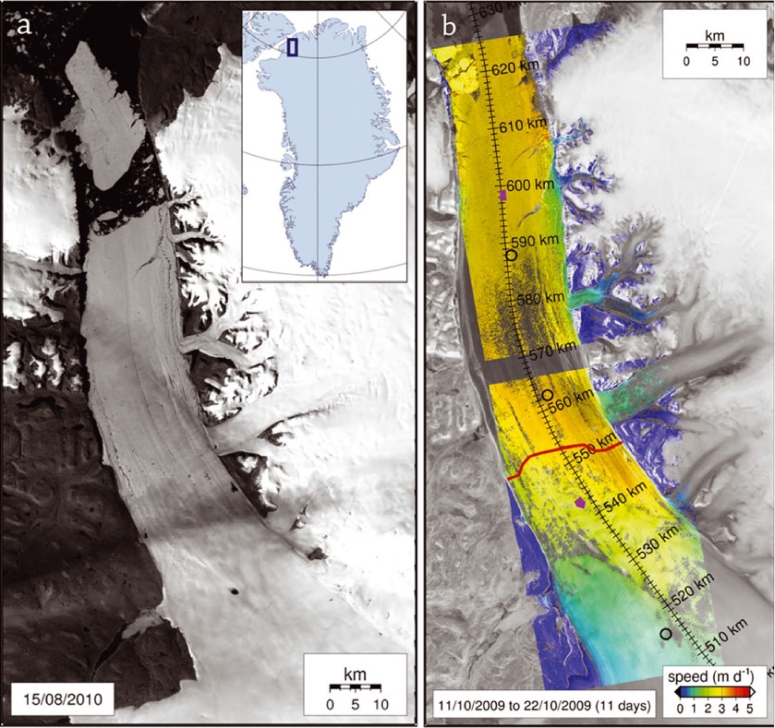 Figure 3: Figure from [7] – Panchromatic Landsat 7 image of Petermann Glacier shortly after the 2010 calving event; (b) example of TerraSAR-X feature tracking showing the hinge line (red; Rignot, 1996), the flowline transect (black) and locations (purple) above and below the grounding line selected for observation/model comparison. Black circles illustrate the positions of the recently deployed GPS units. Date format is day/month/year.

Two huge glacier calving events have occurred at Petermann Glacier over the past 5 years, one in 2010 and another in 2012 [9, 10]. During each event a large portion of the floating ice tongue broke away and drifted out of the fjord, before finally melting and disintegrating in Baffin Bay. These twin calving events resulted in a glacier retreat of 35 km, the most retreated position since the area was first surveyed in 1875 [11, 8]. Glacier calving and retreat has prompted speculation about the glaciers future, a major motivation for the Petermann 2015 expedition. It is crucial that we understand whether these calving events are part of the natural cyclical behaviour of the glacier, or stem from external influences – either through climate or ocean warming. We hope to answer these questions by reconstructing the behaviour of the glacier, oceans, and climate over timescales of thousands of years, providing valuable context against which to assess the magnitude of current changes.

*Based on average water consumption of 167 litres per person, per day, and a population of 8 million people.

One thought on “Background”